The Government has launched its long-awaited consultation into ‘off-payroll working’ (IR35) in the private sector.

In April 2017, the IR35 rules were amended for public sector engagements, for the first time making engagers responsible for assessing the IR35 status of limited company contractors.

Despite bountiful evidence to suggest the public sector changes have been chaotic, and HMRC’s IR35 assessment tools inaccurate, the Government appears to be convinced that a further extension to the private sector is a good idea.

Indeed, according to today’s publication, the implementation of ‘off-payroll’ rules in the public sector has resulted in a “£410m” windfall for the Treasury.

Justifying this new consultation, the document suggests that “the taxpayer could be missing up to £1.2bn a year by 2023 as a result of people getting the rules wrong, and incorrectly paying tax as if they were self-employed.” 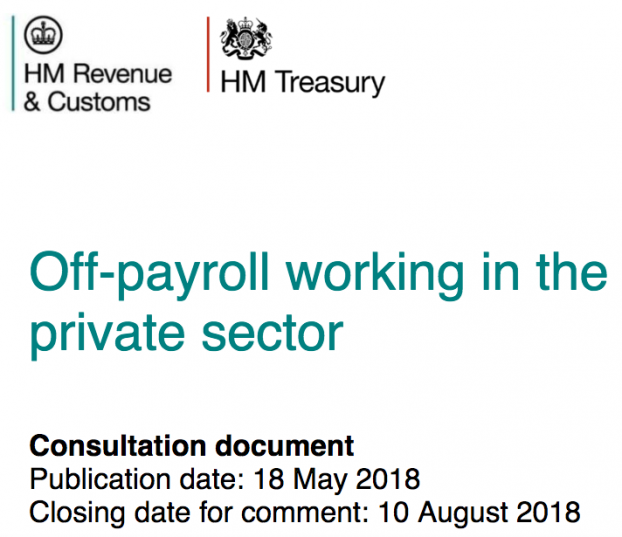 Interestingly, according to the factsheet which forms part of the consultation pack, the Government estimates that “… two-thirds of people working through a company are genuinely self-employed and not affected by these rules. But around one third are working as employees.”

But then, the introduction to the consultation document states: “It is estimated that in 90% of cases within the private sector, the IR35 rules are not applied correctly.”

What are the prospects for a private sector extension?

The consultation document makes it clear that HMRC isn’t simply considering an extension of the current public sector IR35 reforms, but also alternatives, such as supply chain assurances/checks, and additional record-keeping processes by clients.

In theory, private sector changes could be implemented as soon as April 2019.

Hopefully, the strength of feeling from within the industry, in general, will be made very clear during the consultation process, and sense will prevail – as a rollout to the private sector will be massively more impactful that this last April’s public sector changes.