A rapidly growing petition, asking the Chancellor not to consider extending the ‘off-payroll’ IR35 changes to the private sector, has received over 10,000 signatures – meaning that the Government is compelled to respond.

The petition states: “There is evidence that the Chancellor is planning to extend IR35 legislation to the private sector in an attempt to equalise the payments and tax regimes between contractors and permanent employees. Contractors take considerable risk in their financial stability and can be without work for weeks.”

Several weeks ago, two leading papers suggested that the Treasury is considering doing just that – expanding the scope of the current off-payroll rules so that private sector clients will become responsible for determining the employment status of contractors. These rumours inspired consultant Ian Kendrick to set up the petition on the GOV.UK site.

What are the Chancellor’s intentions?

The public sector reforms, implemented in April 2017, have made ‘fee payers’ responsible for operating the legislation – determining whether IR35 should apply to each contract, and then calculating and collecting taxes from those caught. However, this initial roll-out has been deemed by many to have been a disaster.

Despite this, many are expecting the Chancellor to make an announcement in the forthcoming budget – either to extend the off-payroll rules to the private sector at a specific date or to open the topic up to a consultation.

A rapidly growing campaign – as this one is – is a strong indicator of sentiment. 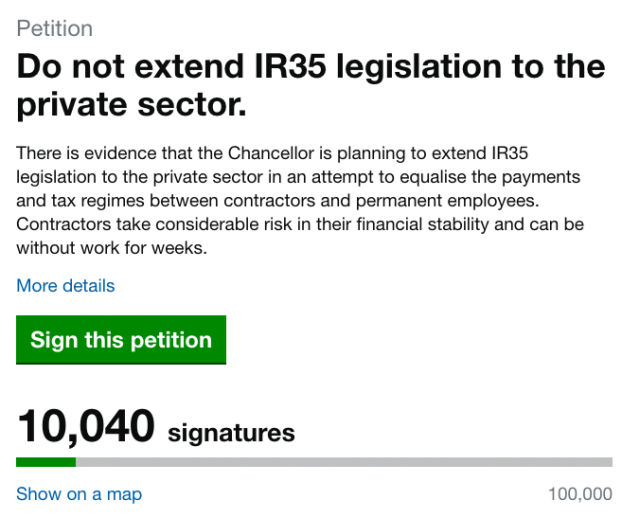