The new April 2016 dividend tax will cost company owners thousands each year. This controversial measure could be debated in Parliament once an online petition reaches the 100,000 signature mark. Are you ready to take part?


What is the new dividend tax?

From April 2016, the current system of dividend taxation (which involves applying a tax credit to net dividends, and taxing the ‘gross’ dividend) will be retired, and replaced a series of fixed tax rates, corresponding to the basic, higher and additional tax bands.

Announcing the change during the July 2015 Budget, the Chancellor said that he expected the new measure to raise an extra £2.5bn during 2016/17 alone.

Despite the measure being implemented to “remove some of the tax benefits of incorporating compared to employment”, all limited company shareholders will be targeted, and many will pay significantly more tax as a result.

Our summary page on the new dividend tax has been widely viewed over the past few months. It contains a illustrative table showing the effects of the tax hike on typical limited company contractors.

You can try our dividend tax hike calculator to work out how the tax will affect you.

Last September, entrepreneur Serena Humphrey (pictured above, front right, with her team) launched an online petition against the proposed increased on the GOV.UK website, as part of her broader Survive and Succeed campaign, which aims to increase the long term survival rates of small businesses. 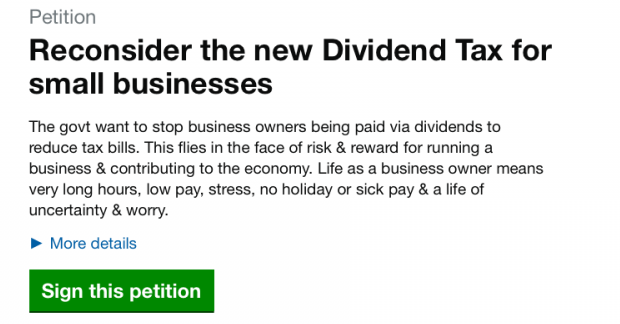 Once the 10,000 signature mark had been reached, the Government were obliged to provide a written response.

In our view, the Government’s response was very disappointing.

The new tax has been created in response to so-called ‘tax-motivated incorporation’, i.e. to increase the tax burden on those who work via limited companies purely to pay less tax. However, all limited company owners will pay more tax as a result, not merely those who may view incorporating as simply a tax-saving measure.

Contractors cannot legally undertake contract work without having an intermediary in place (umbrella or limited company), so they have no choice but to work via a company.

Business owners take on a lot of risks – they receive no sick or holiday pay, employers’ insurance cover, employers’ pension contributions, or any other perks traditional employees typically receive. Any ‘tax advantage’ derived from being limited will now be significantly reduced, but the cost of paying to enjoy the same so-called ‘perks’ as normal employees remains the same.

You can read our full response to the Government’s arguments here.

Speaking earlier today, Serena Humphrey told us: “We are finding that so many business owners still know nothing at all about the tax and yet we know that every business owner we’ve spoken to is very angry about it and the damage it’s going to do the SME economy.”

“This is not a fat cat tax, it will affect hundreds of thousands of ordinary business owners. With a mere 40% of businesses surviving beyond 5 years, this new tax will surely force even more small businesses into liquidation,” Humphrey continued.

“We have five weeks left to reach the 100,000 signature mark required to propel the issue towards a possible debate in Parliament. Please share the link with your colleagues, clients and friends – via social media, email, and any other method.”

You can sign the petition here. The deadline for signatures is 24th February.